In this theory, the quantum particle (be it a photon, a positron, an electron, and so on) goes from an initial event to a (nearby) later event along each and every path - there’s an infinity of them (shades of Huygens Principle). The final amplitude is found by adding up the contributions from all these alternative paths. However, as the different paths have different lengths, then the phase-advance will be different and not necessarily equal to a whole number of wavelengths, and so the waves will not arrive instep. Only a very few nearby paths will add coherently and contribute significantly to the final amplitude; most paths will add destructively and yield no net contribution. (As Freeman Dyson reported it: “Dick Feynman told me. . . “The electron does anything it likes. . . It just goes in any direction at any speed. . . however it likes, and then you add up the amplitude and it gives you the wave-function.” I said to him, “You’re crazy.” But he wasn’t.”) Feynman’s beautifully simple theory not only agrees very precisely with experiment but explains away the teleological objection - that the particle doesn’t ‘know’ which path to follow - wrong, it follows all paths. Also, the theory goes over into the classical limit: for massive particles, say, a football moving at 10 ms$^{–1}$, the wavelength is so miniscule (around $10^{-34}$ m) that there isn’t the remotest hope for paths to interfere constructively - only one path survives, the very path predicted by the Principle of Least Action.

The Lazy Universe by Coopersmith

Origin of the Path Integral

The path integral idea emerges naturally when we consider what happens when we have many double slit experiments in a row: 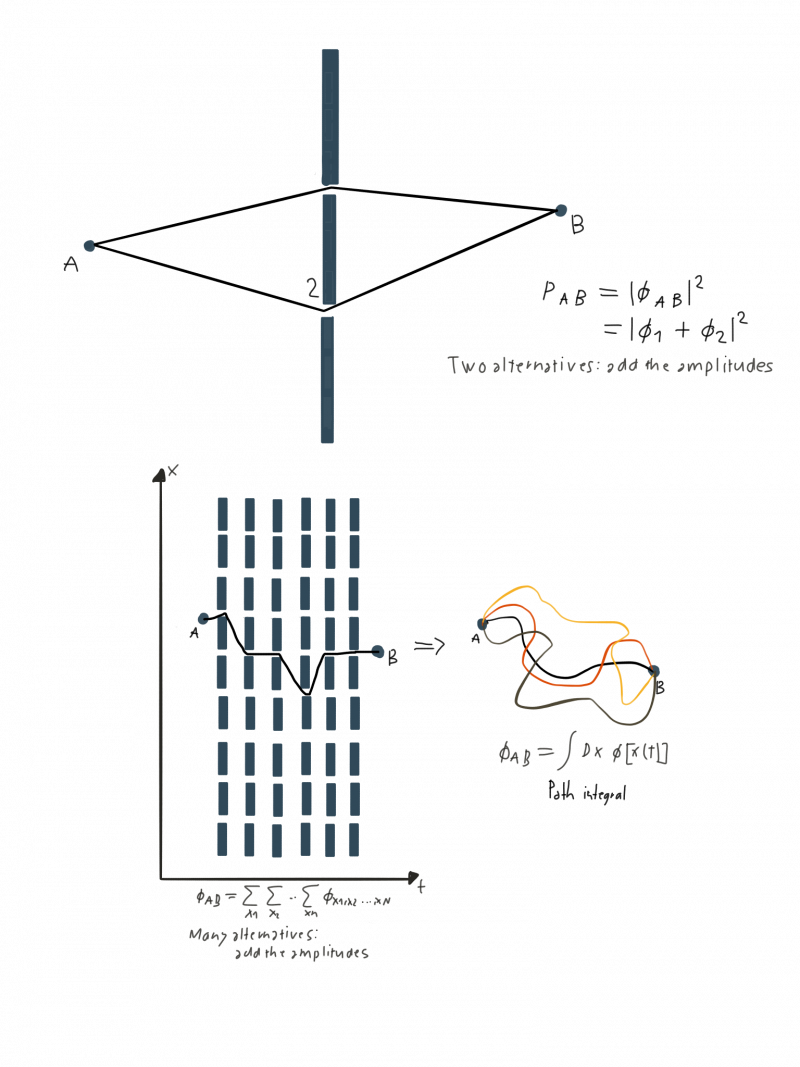 Recall the famous double-slit experiment in quantum mechanics, in which a beam of electrons is fired through two slits. If the electrons are classical particles like tiny balls, then we should expect the screen to have two bright strips corresponding to where the electrons hit, i.e. we would not expect interference pattern, which is a characteristic of wave. However, when the experiment is conducted, we observe interference pattern { electrons do have wave properties! It is not that the electrons are interfering with each other and thus somehow cause the interference pattern, since by firing the electrons one at a time, interference pattern still build up gradually as more and more electrons go through the slits. Quantum mechanically, we often say that the wave function will be the sum of two possible states: one that passes through slit A and one that passes through slit B, and the wave function is in a superposition of states. However there is no reason why we should stop at two slits, we could have three, and then the wave function will be the sum of three possible states. We can also have more than one screen. Therefore we could have say first screen with 2 slits, second screen with 3 slits etc. and stack them all together. That is, we have to consider all the probabilities of particle passing through the i-th slit of the k-th screen. Now imagine that we increase the number of screens and the number of slits and continue to do so in the limit towards infinity. In the limit with infinitely many slits, the slits are not there anymore! Therefore we reached a seemingly absurd [what isn’t in quantum mechanics?] conclusion that even in empty space without physical screens, we have to consider the probabilities of the particles taking all possible paths from one point to another instead of just the classical path [which is the unique path determined by solving differential equation of the Newtonian equation of motion given some initial condition.] As Zee described it, this is almost Zen. Where is the Commutation Relation Hiding in the Path Integral Formulation by Yen Chin Ong

But Feynman persisted, “What if we now add another screen (fig. I.2.2) with some holes drilled in it?” The professor was really losing his patience: “Look, can’t you see that you just take the amplitude to go from the source S to the hole $A_i$ in the first screen, then to the hole $B_j$ in the second screen, then to the detector at O , and then sum over all i and j ?” Feynman continued to pester, “What if I put in a third screen, a fourth screen, eh? What if I put in a screen and drill an infinite number of holes in it so that the screen is no longer there?” The professor sighed, “Let’s move on; there is a lot of material to cover in this course.”

Page 7 in QFT in a Nutshell by A. Zee

In the path integral formalism, we calculate the probability that a particle, which starts at some point $S$, ends up at some point $P$, by summing over all possible paths that connect $S$ and $P$.

For each path, we can calculate a probability amplitude $A_i$. To get the total probability that the particle ends up at $P$, we sum over all these amplitudes $A_i$ and then square the result.

Each amplitude is basically a complex number and thus can be represented by an arrow in the complex plane.

The path integral formalism is what we get when we apply the Lagrangian framework to quantum mechanics. This is described, for example, here.

The use of Feynman path integrals in physics has been an extremely useful heuristic. From time to time, people ask, whether these integrals can be made rigorous, in the sense that they are defined by an underlying measure on path-space. The answer is that, even in the Gaussian case, there is no such measure. This is known as Cameron's theorem. It means that the usual manipulations of integral calculus, such as changing the order of integrations (Fubini's theorem), or differentiation under the integral sign, might give wrong answers. Often, the answer given by a Gaussian Feynman integral is correct. In such a case, one might find a justification by introducing concepts such the promeasures of Cecile deWitt-Morette. A more general method, which works in quantum field theories of space-time dimension 3, is to adopt a euclidean approach, in which functions are analytically continued to imaginary time, as in Glimm and Jaffe. This converts the Feynman integral to a Wiener integral (which does exist); the integrals can then be defined; physics then has to be recovered by analytic continuation back to real space-time, and the proof that this is possible is one of the harder parts of the analysis.Lost Causes in Theoretical Physics by Streater

For a possible physical interpretation of the path integral in terms of Random Walks, see

The path integral is extremely useful to understand global properties of a system in quantum field theory.

In addition to these standard applications, the path integral is also somewhat popular in quantitative finance.

One of the great advantages of the path integral formulation of quantum mechanics and field theory is the possibility of identifying nonperturbatively the stationary configurations that dominate the action and thereby identify and understand the essential physics of complex systems with many degrees of freedom.

One of the major advantages of the path integral representation of quantum mechanics is that it most transparently embodies the transition to classical mechanics, i.e. the semiclassical limit.

The most useful approach to the quantization of gauge theories appears to be Feynman's path integral method. From a geometric point of view, the path integral has the advantage of being able to take into account the global topology of the gauge potentials, while the canonical perturbation theory approach to quantization is sensitive only to the local topology.

It is in quantum field theory, both relativistic and nonrelativistic, that path integrals (functional integrals is a more accurate term) play a much more important role, for several reasons. They provide a relatively easy road to quantization and to expressions for Green’s functions, which are closely related to amplitudes for physical processes such as scattering and decays of particles. The path integral treatment of gauge field theories (non-abelian ones, in particular) is very elegant: gauge fixing and ghosts appear quite effortlessly. Also, there are a whole host of nonperturbative phenomena such as solitons and instantons that are most easily viewed via path integrals. Furthermore, the close relation between statistical mechanics and quantum mechanics, or statistical field theory and quantum field theory, is plainly visible via path integrals. Path Integral Methods and Applications by Richard MacKenzie

The path integral formulation of quantum mechanics is the one in which one can see in the most natural and transparent way that the quantization of a given classical dynamical system depends often in a crucial way upon the global topological properties of the underlying configuration space. Indeed, the .propagator is expressed, roughly speaking, as a weighed sum over all possible paths connecting any two given points in configuration space. As the paths wander through all of the space, they also probe its topology.

How do particle arise in the path integral formulation?
See https://physics.stackexchange.com/questions/303984/particle-picture-in-the-path-integral-formulation-of-quantum-field-theory

Are the path integral formalism and the operator formalism inequivalent?
https://physics.stackexchange.com/questions/252213/are-the-path-integral-formalism-and-the-operator-formalism-inequivalent

Where are the canonical commutation relations hidden in the path integral formulation?
See Where is the Commutation Relation Hiding in the Path Integral Formulation by Yen Chin Ong

Why is the contribution of a path in Feynmans path integral formalism proportional to the action in the exponent?
see https://physics.stackexchange.com/questions/8663/why-is-the-contribution-of-a-path-in-feynmans-path-integral-formalism-sim-e

What's the physical Interpretation of the Integrand of the Feynman Path Integral?
see https://physics.stackexchange.com/questions/61139/physical-interpretation-of-the-integrand-of-the-feynman-path-integral/202298#202298

Thirty-one years ago, Dick Feynman told me about his ‘‘sum over histories’’ version of quantum mechanics. ‘‘The electron does anything it likes,’’ he said. ‘‘It just goes in any direction at any speed,… however it likes, and then you add up the amplitudes and it gives you the wavefunction.’’ I said to him, ‘‘You’re crazy.’’ But he wasn’t.