Quantum gravity is the generic term for theories that try to combine the principles of quantum theories with general relativity.

So far, no experimentally verified theory of quantum gravity exists.

From a brief analysis of the standard Einstein-Hilbert action, we see that fluctuations of the metric at the Planck scale should become very violent, leading to potential changes in the topology of the spacetime [103, 104]. https://arxiv.org/abs/1711.00864

One of the big problems in physics — perhaps the biggest! — is figuring out how our two current best theories fit together. On the one hand we have the Standard Model, which tries to explain all the forces except gravity, and takes quantum mechanics into account. On the other hand we have General Relativity, which tries to explain gravity, and does not take quantum mechanics into account. Both theories seem to be more or less on the right track — but until we somehow fit them together, or completely discard one or both, our picture of the world will be deeply schizophrenic.

It seems plausible that as a step in the right direction we should figure out a theory of gravity that takes quantum mechanics into account, but reduces to General Relativity when we ignore quantum effects (which should be small in many situations). This is what people mean by "quantum gravity" — the quest for such a theory.

At the beginning of the XX century, General Relativity (GR) and Quantum Mechanics (QM) once again began reshaping our basic understanding of space and time and, respectively, matter, energy and causality —arguably to a no lesser extent. But we have not been able to combine these new insights into a novel coherent synthesis, yet. The XX century scientific revolution opened by GR and QM is therefore still wide open. We are in the middle of an unfinished scientific revolution. Quantum Gravity is the tentative name we give to the “synthesis to be found”."Unfinished Revolution" by C. Rovelli

Here's an incomplete list of popular approaches to formulate a theory of quantum gravity:

List adapted from Strings, loops and others: a critical survey of the present approaches to quantum gravity by Carlo Rovelli

Is Einstein Relativity only an Effective Theory?

The essential point in using an effective field theory is you're not allowed to make any assumption of simplicity about the Lagrangian. Certainly you're not allowed to assume renormalizability. Such assumptions might be appropriate if you were dealing with a fundamental theory, but not for an effective field theory, where you must include all possible terms that are consistent with the symmetry. The thing that makes this procedure useful is that although the more complicated terms are not excluded because they're non-renormalizable, their effect is suppressed by factors of the ratio of the energy to some fundamental energy scale of the theory. Of course, as you go to higher and higher energies, you have more and more of these suppressed terms that you have to worry about.16 What is QFT and what did we think it was? 247 On this basis, I don't see any reason why anyone today would take Einstein's general theory of relativity seriously as the foundation of a quantum theory of gravitation, if by Einstein's theory is meant the theory with a Lagrangian density given by just the term y/gR/\67rG. It seems to me there's no reason in the world to suppose that the Lagrangian does not contain all the higher terms with more factors of the curvature and/or more derivatives, all of which are suppressed by inverse powers of the Planck mass, and of course don't show up at any energy far below the Planck mass, much less in astronomy or particle physics. Why would anyone suppose that these higher terms are absent?

Is it possible that spacetime is emergent in the correct theory of quantum gravity?

Let me also mention a remarkable numerical quantum gravity calculation by J. Ambjorn, J. Jurkiewicz J. and R. Loll [6] starting from a functional integral in which each spacetime history appears with a weight given by the exponentiated Hilbert-Einstein action of the corresponding geometry. Computer simulations on this functional integral lead to the result that a 4D De Sitter Group universe emerges on large scales. The authors remark “This emergence is of an entropic, self-organizing nature, with the weight of the Einstein-Hilbert action playing a minor role. Also the quantum fluctuations around this de Sitter universe can be studied quantitatively and remain small until one gets close to the Planck scale. The structures found to describe Planck-scale gravity are reminiscent of certain aspects of condensed-matter systems.” This latter facet is most excellently described in 346. 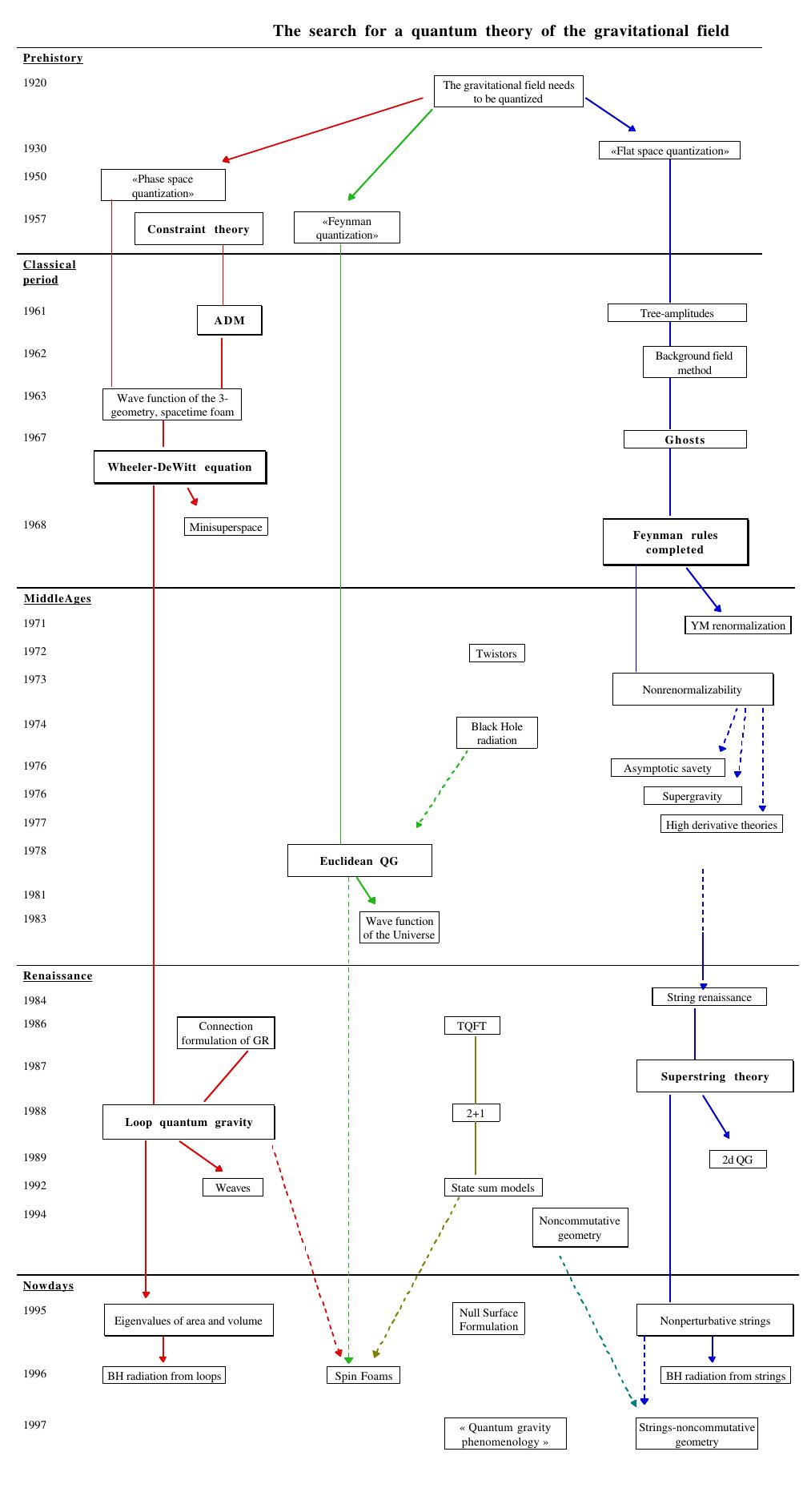 Source: Notes for a brief history of quantum gravity by Carlo Rovelli

“Pursuing different and independent ideas is certainly a good strategy as long as we do not know the final answer, but it is a bit worrisome (at least to me) that the proponents of the different approaches not only base their approaches on very different assumptions, but continue to speak languages that are foreign to one another. Surely, when zeroing in on the ‘correct’ theory there should be a convergence of ideas and concepts: when Schrödinger proposed wave mechanics and Heisenberg formulated matrix mechanics, these were initially regarded as very different, but it did not take long before it became clear that they were just equivalent descriptions of the same theory. Unfortunately, at this time there is no such convergence in existing approaches to quantum gravity – a sign that we are probably still very far from the correct answer! […] In one form or another the existing approaches to quantum gravity suffer from a very large number of ambiguities, so far preventing any kind of prediction with which the theory will stand or fall. Even at the risk of sounding polemical, I would put this ambiguity at 10^500 (or even more) – in any case a number too large to cut down for any conceivable kind of experimental or observational advance. […] Being exposed to many talks from the different ‘quantum gravity camps’ I am invariably struck by the success stories I keep hearing, and the implicit or explicit claims that ‘we are almost there’. I, for one, would much prefer to hear once in a while that something does not work, and to see some indications of inconsistencies that might enable us to discriminate between a rapidly growing number of diverging ideas on quantum gravity [27, 28]. If, however, the plethora of theory ambiguities were to stay with us I would conclude that our search for an ultimate explanation, and with it the search for quantum gravity, may come to an ignominious end” from Quantum Gravity: The View From Particle Physics by Hermann Nicolai