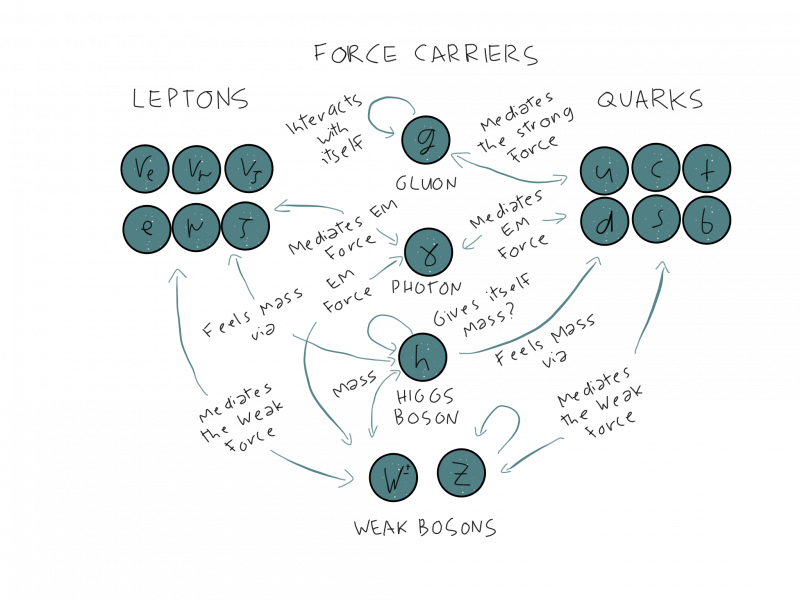 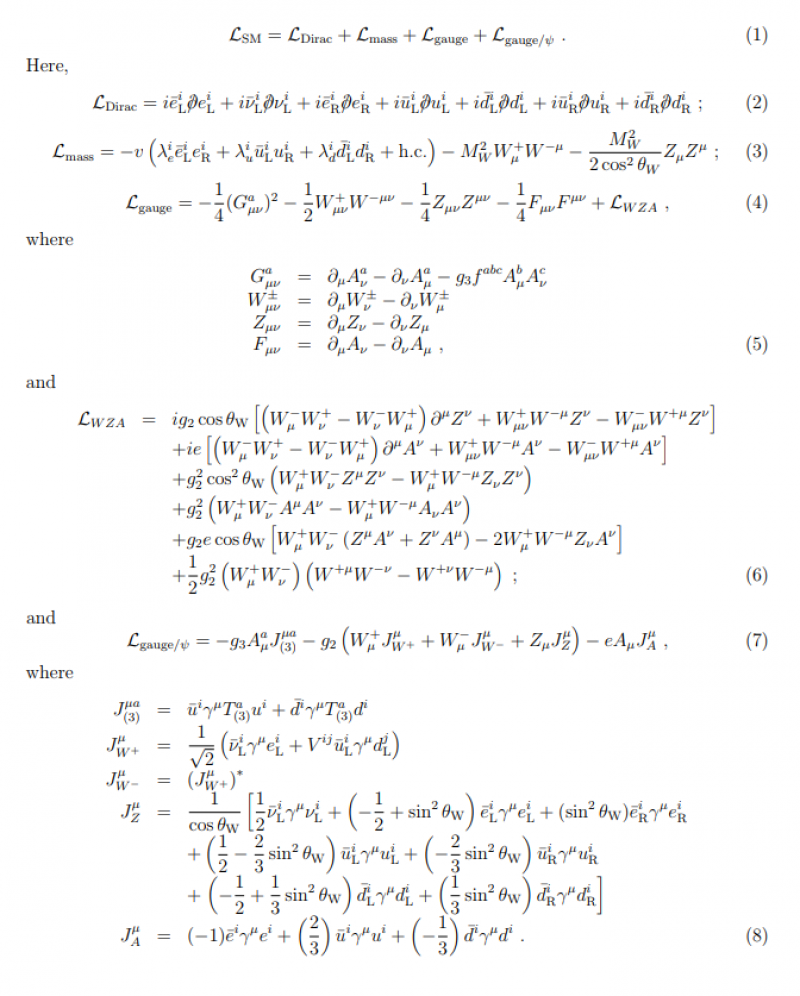 The photon couples to the electric charge which is a linear combination of hypercharge and weak isospin $$ q\ =\ T^3\ +\ Y . $$

The $W^\pm$ and $Z^0$ bosons are responsible for the weak interactions. Since both are massive the weak force is short-ranged.

The bosons responsible for the strong force are called gluons. This name stems from the fact that they ``glue'' the quarks and antiquarks together. Bound states made of quarks and antiquarks are called baryons and mesons. The strong forces become stronger with rising distance between two color-chared particles. As a result individual quarks, antiquarks, or gluons can't be isolated. This is known as confinement. Only $SU(3)_C$ singlets can be observed.

The right-handed quarks are $SU(2)_L$ singlets.

This curious difference between left-handed and right-handed quarks means that weak interactions disrespect the parity symmetry. The bosons $W^\pm$ only couple to the left currents $J^\mu_L=V^\mu-A^\mu$ and don't care about the right currents $J^\mu_R=V^\mu+A^\mu$. 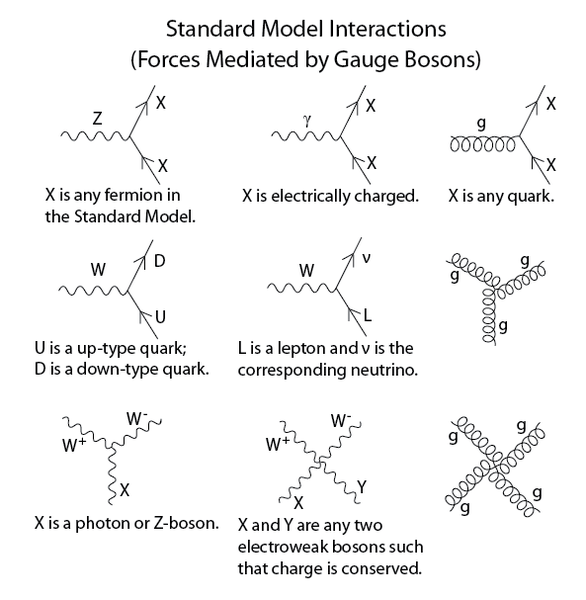 Source: Image by Garyzx published under the CC BY-SA 3.0 licence

The Standard Model of particle physics is a superb monument attesting to the inner beauty of nature and the power of human logical deduction. It is astounding how natural phenomena, in all their complexity, can be summarised by a single principle – the gauge principle – and described by a compact set of equations. And it is equally astounding how humans have been able to crack this secret. Along this path, the synthesis of general relativity with the physical laws derived in the microworld has led to the ΛCDM model, which can successfully describe a huge array of cosmological observations, the present largescale structure of the universe and its early history, in terms of a handful of parameters.The Dawn of the Post-Naturalness Era by Gian Francesco Giudice

However, the corresponding Lie group is not necessarily

which all have the same Lie algebra. (Source)

What people usually call the gauge group of the Standard Model: SU(3) × SU(2) × U(1) actually has a bit of flab in it: there's a normal subgroup that acts trivially on all known particles. This subgroup is isomorphic to Z/6. If we mod out by this, we get the "true" gauge group of the Standard Model: G = (SU(3) × SU(2) × U(1))/(Z/6) And, this turns out to have a neat description. It's isomorphic to the subgroup of SU(5) consisting of matrices like this: (g 0) (0 h) where g is a 3×3 block and h is a 2×2 block. For obvious reasons, I call this group S(U(3) × U(2)) If you want some intuition for this, think of the 3×3 block as related to the strong force, and the 2×2 block as related to the electroweak force. A 3×3 matrix can mix up the 3 "colors" that quarks come in - red, green, and blue - and that's what the strong force is all about. Similarly, a 2×2 matrix can mix up the 2 "isospins" that quarks and leptons come in - up and down - and that's part of what the electroweak force is about. […] l assume that one way or another, you're happy with the idea of S(U(3) × U(2)) as the true gauge group of the Standard Model! Maybe you understand it, maybe you're just willing to nod your head and accept it.

r. Correlation functions of local operators in R1,3 depend only on the Lie algebra of the gauge group and are unaffected by global issues such as the choice of Γ. This means that no current experiment can distinguish between the four possibilities. Nonetheless, the physics in flat space can depend in subtle ways on Γ (and in more dramatic ways when spacetime has interesting topology). The purpose of this paper is to describe the crudest differences between the theories: the spectrum of line operators and the periodicities of theta angles.https://arxiv.org/pdf/1705.01853.pdf

A great discussion of these things with awesome illustrations can be found in section 1.4 and at page 26 in Some Elementary Gauge Theory Concepts by Hong-Mo Chan, Sheung Tsun Tsou:

As a further example, consider the standard electroweak theory. In this case, the gauge group was identified in Section 1.4 as $U(2)$ or $[SU(2)\times U(1)]/Z_2$, by which we meant that $U(2)$ can be obtained from $SU(2) \times U(1)$ by identifying certain pairs of elements as explained in the paragraph after 1.4.9. The group $SU(2) \times U(1)$ itself consists of couples of elements from respectively the groups $SU(2)$ and $U(1)$, which we mai represent symbolically as points inside the rectangle in Figure 2.8 where the vertical axis represents the group $SU(2)$ and the horizontal axis $U(1)$, and the parallel edges of the rectangle are understood to be identified so as to make the rectangle into a "hyper torus".

However, the corresponding Lie group is not necessarily

which all have the same Lie algebra. (Source)

A nice discussion of this can also be found at page 272 in "Quantum Field Theory - A Modern Perspective" by V. P. Nair.

What questions are left open by the standard model?
See Open Problems

What symmetries do exist in the standard model and what is their experimental status?
see https://physics.stackexchange.com/questions/97896/symmetries-of-the-standard-model-exact-anomalous-spontaneously-broken