Symmetry is the pattern that tells you how to generate one part of an object from another. It condenses information. Saying that a human face is symmetrical is another way of telling you that you do not need to draw both sides of it; instead, you can generate the left side from the right. Said differently, a truly symmetric human face is indistinguishable from its mirror image, which flips the left and right sides.

From My Life As A Quant by Emanuel Derman

One way to understand the intention of designer of an universe is to find the symmetries. The search for symmetry can be substantially different mental activity from the usual explicit calculations. For example, consider the following simple arithmetic: $$34126 \times 12378 - 12378 \times 34126 = ? $$ You can compute the first term using calculator, and store in the memory. The second term is calculated, and subtracted from the previous result stored in memory. The final numeric result tells us that one should use brain instead of fingers in scientific problems. Of course, the commutative property of multiplication is enough to write down the answer. The morale of this example is: find the greatest possible symmetry whenever possible

From Magnetic Monopoles in Grand Unified Theories by I. G. Koh

A symmetry can be 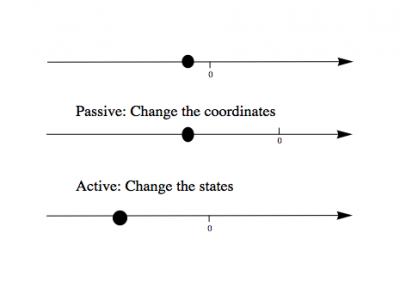 We can ask how the symmetry G is realized, in at least three senses:

Symmetry is the magic word that distinguishes theory from coincidence.

In physics we use many different types of symmetries, but they have one thing in common: they are potent unifying principles because they explain how things that once appeared very different actually belong together, connected by a symmetry transformation.

Lost in Math by Sabine Hossenfelder

For the physicist, a symmetry is an organizing principle that avoids unnecessary repetition. Any type of pattern, likeness, or order can be mathematically captured as an expression of symmetry. The presence of a „symmetry always reveals a redundancy and allows simplification. Hence, symmetries explain more with less. For example, rather than telling you today’s sky looks blue in the west and the east and the north and the south and the southwest, and so on, I can just say it looks blue in every direction. This independence on the direction is a rotational symmetry, and it makes it sufficient to spell out how a system looks in one direction, followed by saying it’s the same in all other directions. The benefit is fewer words or, in our theories, fewer equations. The symmetries that physicists deal with are more abstract versions of this simple example, like rotations among multiple axes in internal mathematical spaces. But it always works the same way: find a transformation under which the laws of nature remain invariant and you’ve found a symmetry. Such a symmetry transformation may be anything for which you can write down an unambiguous procedure—a shift, a rotation, a flip, or really any other operation that you can think of. If this operation does not make a difference to the laws of nature, you have found a symmetry. […] The symmetry requirement therefore limits the possible laws we can write down. The logic is similar to coloring a mandala. If you want the color fill to respect the symmetry of the design, you have fewer options than when you ignore the symmetry. Lost in Math by Sabine Hossenfelder

„One moonlit night, we walked over the Hainberg Mountain, and he [Werner Heisenberg] was completely enthralled by the visions he had, trying to explain his newest discovery to me. He talked about the miracle of symmetry as the original archetype of creation, about harmony, about the beauty of simplicity, and its inner truth.“

Inner Exile: Recollections of a Life with Werner Heisenberg by Elisabeth Heisenberg

”Symmetry pervades the inner world of the structure of matter, the outer world of the cosmos, and the abstract world of mathematics itself. The basic laws of physics, the most fundamental statements we can make about nature, are founded upon symmetry” L. M. Lederman and C. T. Hill, Symmetry and the Beautiful Universe (Prometheus Books, Amherst, 2004).

Physicists are mostly agreed that the ultimate laws of Nature enjoy a high degree of symmetry. By this I mean that the formulation of these laws, be it in mathematical terms or perhaps in other accurate descriptions, is unchanged when various transformations are performed. Presence of symmetry implies absence of complicated and irrelevant structure, and our conviction that this is fundamentally true reflects an ancient aesthetic prejudice - physicists are happy in the belief that Nature in its fundamental workings is essentially simple. Moreover, there are practical consequences of the simplicity entailed by symmetry: it is easier to understand the predictions of physical laws. For example, working out the details of very-many-body motion is beyond the reach of actual calculations, even with the help of computers. But taking into account the symmetries that are present allows one to understand at least some aspects of the motion, and to chart regularities within it.

The Unreasonable Effectiveness of Quantum Field Theory by R. Jackiw

As far as I see, all a priori statements in physics have their origin in symmetry. H. Weyl

The most important lesson that we have learned in this century is that the secret of nature is symmetry. D. Gross

Today we realize that symmetry principles . . . dictate the form of the laws of nature. D. Gross

Symmetry principles have moved to a new level of importance in this century and especially in the last few decades: there are symmetry principles that dictate the very existence of all the known forces of nature. S. Weinberg

To a remarkable degree, our present detailed theories of elementary particle inter- action can be understood deductively, as consequence of symmetry principles . . .. S. Weinberg

If you can identify Nature’s complete symmetry group, you will know everything” is what became a pivotal dogma. G.’t Hooft

Global Vs. Local, Continous vs. Discrete

It is believed that no global symmetries exist in a quantum theory of gravity [40]. This suggests that global symmetries are not ingredients of the fundamental theory. Global sym- metries can only be approximate and accidental. In other words, they are emergent properties at low energy. A simple example is the rotational symmetry that emerges in the spherical-cow approximation. Examples more pertinent to particle physics are baryon and lepton number in the SM, custodial symmetry of the Higgs model in the limit of vanishing hypercharge and quark mass difference, flavour symmetry in the limit of vanishing Yukawa couplings, isospin symmetry in nuclear forces, chiral symmetry in the pion Lagrangian, and many oth- ers. These examples show that global symmetry is a useful concept in the IR. It is useful as a classifier in low-energy theories, both in linearly realised versions (establishing selection rules for forbidden local operators) and non-linear versions (characterising the structure of the Lagrangian of light scalar particles). However, in spite of their practical usefulness in the IR, they are probably inconsequential in the UV, where the truly fundamental theory is expected to live.

The same “folk theorem” that rules out continuous global symmetries at the fundamental level applies to discrete (non-gauge) symmetries as well. The Standard Model vouches for this assertion since discrete symmetries like C, P, and T can be explained as the result of Lorentz invariance and the structure of the interactions. Whenever possible, the Standard Model breaks maximally C and CP, both in weak and Yukawa interactions. Surprisingly, this is not true for strong interactions, where the topological structure of the gauge theory allows for a large violation of CP, which is not observed in nature. This anomalous behaviour is taken seriously by most physicists, who believe it cannot be just a fluke of strong interactions, but the indication for some new dynamics yet to be discovered (e.g. the axion).