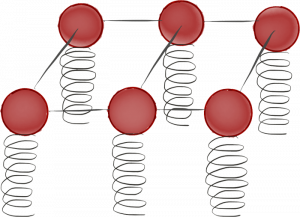 A field in physics is something that associates with each point in space and with each instance in time a quantity.

The easiest way to think about a classical field is as a mattress. A mattress consists of many point masses that are connected by springs. The horizontal location of these point masses is the quantity that is associated with each point in space and time.

The point masses can oscillate and these oscillations influence the neighboring point masses. This way wave-like perturbations can move through the mattress, as everyone knows whoever jumped around on a mattress.

If we now imagine that we zoom out such that the point masses become smaller and smaller we end up with a great approximation to a classical field. A classical field is nothing but the continuum limit of a mattress.

A classical field is a dynamical system with an infinite number of degrees of freedom. We describe fields mathematically by partial differential equations.

We consider first the sourceless equation in four dimensions,

The first issue concerns the existence of regular solutions. If regular initial data is taken, will the solution evolve in a regular fashion, or will the nonlinearities produce singularities? This question has been answered: regular solutions to (2.65) do exist, and the same is true if one considers a larger system: scalar and spinor fields interacting with gauge fields [20].

However, physicists are not so interested in the general solution which depends on arbitrary initial data, but rather in specific solutions which reflect some physically interesting situation. For example, in the Maxwell theory we are interested in plane wave solutions.

Let us note that any Maxwell solution is a solution of the Yang-Mills equation, when one makes the Ansatz that the space and internal symmetry degrees of freedom decouple. If one forms $A_\mu^a(x) = \eta^a A_\mu (x)$ with $\eta^a$ constant and $A_\mu(x)$ satisfying the Maxwell equation, then $A_\mu^a(x)$ is a solution to the Yang-Mills equation, which we shall call "Abelian. Thus it is interesting the see whether there are plane wave solutions in the non-Abelian theory, which are not Abelian. By "plane wave", we shall mean a configuration of finite energy $(0 < \mathcal{e} < \infty$), of constant direction for the Poynting vector $\mathcal{P}(x) = \hat{\mathcal{P}}|\mathcal{P}(x)|$ with $\hat{\mathcal{P}}$ constant, and with magnitude of the Poynting vector equal to the energy density $ \mathcal{e} = \mathcal{P}(x)|$. Such solutions have been constructed [21], but unlike their Maxwell analogs, they do not seem to have any physical significance. certainly, if gauge quanta are confined, one cannot make a coherent superposition of the to construct an observable plane wave. Alternatively, one may view the Maxwell waves as quantum mechanical wave functions for the photon. However, the non-Abelian plane waves solve a nonlinear equation; they cannot be superposed to form other solutions, and it is hard to see how they can be used as wave functions.

Another class of solutions, more appropriate to nonlinear field theories, are the celebrated solitons, which do have a quantum meaning - they are the starting point of a semi-classical description of coherently bound quantum states [22]. A soliton should be a static solution, have finite energy, and be stable in the sense that small perturbations do not grow exponentially in time. However, one proves with virial theorems that no such solution exists in the pure Yang-Mills theory in four, three or two dimensions [23].

Another tack that one take is that of symmetry. Recall that the classical Yang-.Mills theory in four dimensions possesses conformal $SO(4,2)$ symmetry. One may seek solutions invariant under the maximal compact subgroup, i.e. $SO(4) \times SO(2)$. This solution has been constructed [24]; it is called a "meron". But again no physical significance has been attached to it, or to its generalization which possesses the smaller compact invariance symmetry group $SO(4)$ [25].

There are many other solutions to (2.65) that have been found [26], and while their discoverers invariably highlight some unique characteristic, no physical application has been given thus far - although doubtlessly they are mathematically interesting.

There is one more class of solutions, which I shall describe later. These do not solve the Yang-Mills equations (2.65) in Minkowski space, but rather in Euclidean space, and are called instantons (pseudoparticles). In fact instantons solve the self-duality equation

and then (the Euclidean-space analog of) (2.65) follows by the Bianchi identity. […] Of all the solutions, the instantons have interested mathematicians most; for physicists they give a semi-classical understanding of some of the topological effects that are present in Yang-Mills theory.

Like the Hamiltonian formalism for classical physics, the Schrödinger equation is not so much a specific equation, but a framework for quantum mechanical equations generally. Once one has obtained the appropriate Hamiltonian, the time evolution of the state according to Schrödinger's equation proceeds rather as though $|\Psi>$ were a classical field subject to some classical field equation such as Maxwell's. In fact, if $|\Psi>$ describes the state of a single photon, then it turns out that Schrodinger's equation actually becomes Maxwell's equations! The equation for a single photon is precisely the same as the equation for an entire electromagnetic field. (However, there is an important difference in the type of solution for the equations that is allowed. Classical Maxwell fields are necessarily real whereas photon states are complex. There is also a so-called 'positive frequency condition that the photon state must satisfy). This fact is responsible for the Maxwell-field-wavelike behaviour and polarization of single photons that we caught glimpses of earlier. As another example, if 11Ji} describes the state of a single electron, then Schröinger's equation becomes Dirac's remarkable wave equation for the electron discovered in 1928 after Dirac had supplied much additional originality and insight

While our aim is to discuss the quantized Yang-Mills theory, let us pause for a moment and examine the dynamical field equations in their classical setting. After all, the Maxwell theory, which is the antecedent and inspiration for the Yang-Mills theory, was thoroughly investigated within classical physics, with results that are quite relevant physically even when quantum effects are ignored. Unfortunately, no such physical success can be claimed here, though much of mathematical interest has been achieved.