In the beginning mathematicians only used natural numbers: $1,2,3, \ldots$. Then, negative numbers were invented to represent things like debt. For example, $+5$ means a profit of $5$ units, while $-5$ means $5$ units of debt.

The invention of negative numbers then lead to a surprising observation:

For this reason, the imaginary number $i$ was invented. This new number is defined by the property: $i \times i=-1$. In this sense, $i$ was introduced to fill the gap that we discovered above since now we have a number that yields something negative when multiplied by itself.

In the beginning, $i$ was merely a convenient tool to help simplify calculations and its introduction was criticised by many mathematicians. This early criticism is also where the name "imaginary numbers" comes from, which was meant as a derogatory term. 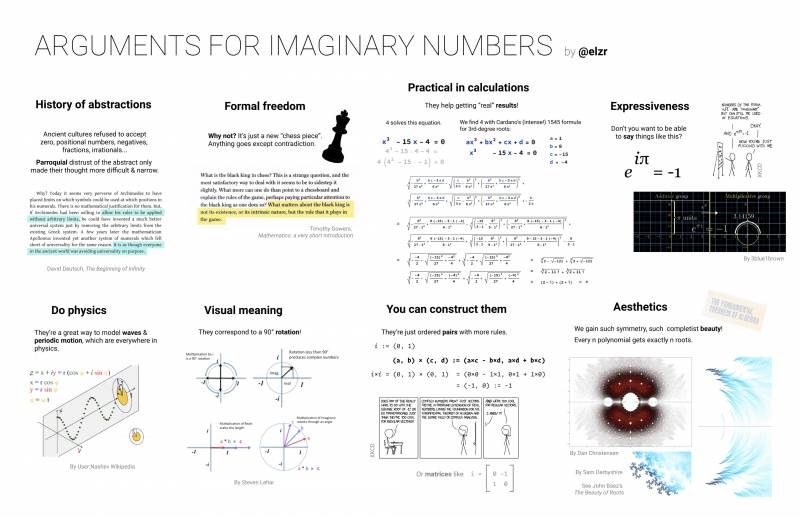 There are further expanded number systems like, for example, quaternions and octonions where multiple "complex units" are introduced.

There is a theorem due to Hurwitz that the only "normed division algebras" are the real numbers, the complex numbers, the quaternions, and the octonions.

Imaginary numbers are essential in modern theories of physics like quantum mechanics and quantum field theory. In these theories, we describe a physical system using complex functions, which means functions that contain combinations of imaginary numbers as arguments.

For some further motivation, see the nice list here.

The shortest path between two truths in the real domain passes through the complex domain. J. Hadamard

The name "imaginary numbers" was introduced by Descartes as a derogatory term.