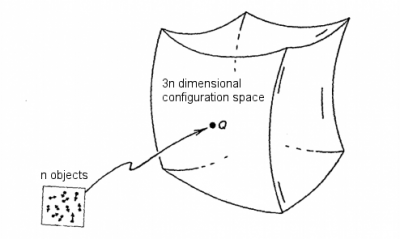 adapted from page 174ff in “The Emperors new Mind” by R. Penrose

The configuration space or configuration manifold is the collection of all the possible "snapshots" or descriptions that the system can take.

The state of a system is recorded in a configuration space point through all the locations that the objects in the system have at a given point in time.

The time evolution of a system can then be represented as a path in configuration space.

The simplest example is an object moving in just one dimension. The configuration space is just a line, i.e. $\mathbb{R}$. Now, if we want to describe two objects which move in one dimension, we have two choices. Either we describe them using two location vectors: 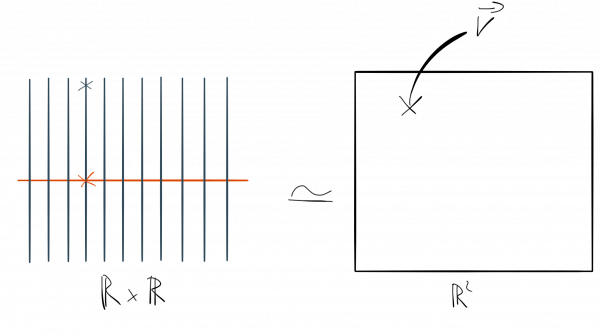 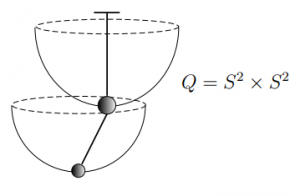 In contrast, for example, for a double pendulum in the traditional language we would need to keep track of the exact positions of the two pendulums.

No matter how many particles or objects there are in our system, each specific configuration is exactly one point in our configuration space.

Any set of parameters which can characterize the position of a mechanical system may be chosen as a suitable set of coordinates. They are called the "generalized coordinates" of the system and are the coordinates of the configuration manifold.

Free Particle
Free Particle on Space : it can be a 3 dimensional manifold, in fact, $\mathbb{R}^3$, and the coordinates can be multiple: Cartesian, spherical, cylindrical coordinates.

Each point in this space $\mathbb{R}^9$ corresponds to one specific configuration of our 3 particle system.

As the name indicates, the mathematical figure is a manifold, and we will denote it as $\mathcal Q$. We will use the letter $q$ to denote the points of the system, and $q^i$ will denote the coordinates. The link between both is called configuration map $$ \chi:\mathcal Q \to \mathbb{R}^n; q \mapsto q^i=\chi^i(q) $$

The tangent bundle TQ will be referred to as configuration space, later on when we get to the chapter on Hamiltonian mechanics we’ll find a use for the cotangent bundle $T^∗Q$, and normally we call this the phase space.Lectures on Classical Mechanics, by John Baez

Configuration spaces are also the central objects in robotics, as the set of reachable positions by a robot.