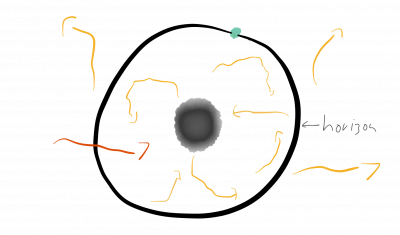 A black hole is a region of space and time where light cannot escape because gravity is so strong. This is possible because light always moves with the same velocity in the vacuum and therefore cannot move so fast as would be required to escape the black hole. In addition, no object or thing can move faster than with this speed of light, and therefore nothing can escape a black hole.

As a result, no light and nothing else can emerge from the black hole.

A black hole is created when a very massive object, like a huge star, collapses. This happens, for example, when a star is burned out and no longer has enough "nuclear fuel". As long as the star is able to radiate, this radiation works against the gravitational pull and keeps the star stable. But when it no longer can radiate, the whole mass of the star collapses due to gravity. The original mass of the object will compress infinitely and forms an extremely massive object that we call a black hole.

Hawking discovered that the area of the horizon of a black hole can never decrease in time. In this sense, it is analogous to entropy, which also always gets larger and larger.

The great insight of Bekenstein was that this was not just an analogy. He argued that a black hole has real entropy, which he conjectured is proportional to the area of its horizon and measures the amount of information trapped beyond that horizon. Three Roads to Quantum Gravity by Lee Smolin

here is a very simple way to interpret this equation which is due to Gerard 't Hooft, who did important work in element- ary particle physics ± for which he won the 1999 Nobel Prize for Physics ± before turning his attention to the problem of quantum gravity. He suggests that the horizon of a black hole is like a computer screen, with one pixel for every four Planck areas. Each pixel can be on or off, which means that it codes one bit of information. The total number of bits of information contained within a black hole is then equal to the total number of such pixels that it would take to cover the horizon. The Planck units are very, very tiny. It would take 10 66 Planck area pixels to cover a single square centimetre. So an astrophysical black hole whose horizon has a diameter of several kilometres can contain a stupendous amount of information. Three Roads to Quantum Gravity by Lee Smolin

In the beginning, many people did not take Bekenstein's ideas about the entropy of a black hole seriously, because of the following reason:

If nothing can come out of a black hole, then it has zero temperature. This is because temperature measures the energy in random motion, and if there is nothing in a box, there can be no motion of any kind, random or otherwise. But ordinarily a system cannot have entropy without it being hot. This is because the missing information results in random motion, which means there is heat. So, if black holes have entropy, there is a violation of the laws of thermodynamics. Three Roads to Quantum Gravity by Lee Smolin

The mystery was solved first by Hawking, who realized that if black holes were hot there was no contradiction with the laws of thermodynamics. By following a chain of reasoning roughly like the story above, he was able to show that an observer outside a black hole would see it to be at a finite temperature. Expressed in Planck units, the temperature $T$ of a black hole is inversely proportional to its mass, $m$. Three Roads to Quantum Gravity by Lee Smolin

where $k_B$ is the Boltzmann constant, $c$ the speed of light, $G$ the gravitational constant, $\hbar$ the reduced Planck constant and $M$ the mass of the black hole.

This formula shows why black holes are so important and interesting. In this little formula everything comes together:

In this sense, black holes are laboratories for quantum gravity.

The temperature of a black hole is tiny. Putting in the numbers yields

Far from a black hole, spacetime is "flat" and you can calculate the configuration of quantum fields that we think of as "the vacuum" (empty space).

You can do the same thing for "empty space" near the edge of a black hole.

However, what Hawking did was show that the "empty space/vacuum" configuration near the event horizon was *different* from the one far from the black hole. Moreover if you started with fields in the vacuum configuration near the black hole, far from the black hole, they'd look exactly like a thermally radiating system. That is, by bending spacetime, the black hole made the vacuum itself radiate away energy. The source of this energy is the black hole's mass, and eventually this process (Hawking radiation) would cause the black hole to evaporate. And there is still so much we don't understand about what all this means. We still don't really know where the entropy of a black hole is coming from. But Hawking made the connection explicit: there is a black hole entropy, it's proportional to the surface area, and it's enormous. […] (There's another way to describe Hawking radiation as "virtual particles near the horizon, one falls in, the other escapes." That's not even really morally incorrect, but its slightly more accurate to think of the vacuum changing.) Anyway, Hawking radiation allows one to show that the maximum entropy ANY volume can have is the entropy of a black hole contained in the volume. Since the entropy of a black hole is set by the surface area, this means the maximum entropy of a volume goes like the area. That's sort of nuts, because it means if I make a room 2x larger in each dimension, I can fit $2^3=8$ times as much stuff, but only 2^2=4 times as much entropy ("information" loosely speaking). So somehow, the information in volume is encoded in the surface area of the volume. This is the "holographic principle" and I don't think we have a great idea of what it means about how our Universe is put together. Anyway, Hawking radiation is a fascinating thing. And it is the opening step in a really interesting area of physics that seems to be saying something very deep about how the Universe works. I'm not sure what.

Jacob Bekenstein and the Development of Black Hole Thermodynamics by Robert M. Wald