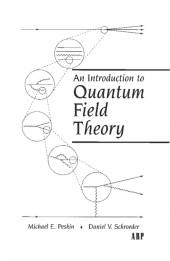 Peskin and Schroeder's "An Introduction to Quantum Field Theory" is the quantum field theory standard textbook.

, For over a decade this has been the standard in QFT pedagogy. It has everything a student could want presented coherently. The style is geared towards calculations, which makes it a handy reference. […] Every QFT student needs this book… but absolute beginners may not find this the most user-friendly text and would benefit from additional references. Either way, I would suggest basing one’s study on Peskin with well-selected auxilliary reading.Flip Tanedo

2.1 The necessity of the field viewpoint

The obvious generalisation from QM of trying to quantize relativistic particles fails due to non-conservation of particle number (deemed necessary by Schrodinger’s equation and impossible by special relativity). Also, the amplitude of propagation between spacelike separated points is non-zero in ordinary QM, even with a relativistic Hamiltonian. An exact cancellation is required for maintaining causality, and QFT provides a natural way of doing so - by creating antiparticles.

The principle of least action implies the Euler-Lagrange equation of motion - they are classical paths living in configuration space. In analogy with QM, we can define the canonical (conjugate) momentum used to switch to the Hamiltonian formalism. However, H isn’t inherently Lorentz invariant, unlike L, which is. The Noether’s theorem states that every continuous symmetry leads to a conserved local current (and hence globally conserved charges). U(1) symmetry in the complex Klein-Gordon Lagrangian is interpreted (upon coupling to E-mag field) as a conserved electric current, Lorentz symmetry leads to (4 conserved currents, put together as) a conserved stress-energy tensor, etc. The Hamiltonian naturally arises as a conserved charge from time-translation symmetry inscribed in the latter.

2.3 The Klein-Gordon field as harmonic oscillators

To quantise a classical theory, we promote the dynamical variables to operators and write down their commutation relations. φ and π are dynamical variables in field theory, and we write down their commutation relations in the Schrödinger picture (or equal time CR in Heisenberg). For the (energy) spectrum of H for KGE, we expand φ and π in Fourier modes (where we have a bunch of decoupled modes) and express them in terms of ladder operators. The treatment is identical to NRQM, except a momentum subscript everywhere. [H,ap] is identical to the SHO case, and so the {a,a†} expansion was indeed a good idea. The particle interpretation follows from the creation operators producing localised states in momentum space. Since the creation operators (indexed by q) commute among themselves, KGE describes bosons. Going back, since φ(x) acts on the vacuum to produce a (Fourier transformed) bunch of localised momentum eigenstates, it creates a particle at x. A final comment is made : the 3-momenta delta function in the commutation relations isn’t a Lorentz invariant - to compensate for that, we affix a factor of 1/2E in the integral measure.http://sdutta9.web.engr.illinois.edu/ps2.html

Non-interacting theories do not couple Fourier modes; interacting (real-world) theories do. We need to add that in the Lagrangian. Causality doesn’t allow a non-local coupling like φ(x)φ(y). We consider three examples : the φ4 theory, QED and the Yukawa theory. φ4 is the simplest and we have all the tools to solve it. Yukawa is quite simple too, with a scalar-fermion coupling and QED is much harder, with gauge invariance coming into picture. In QED a “gauge” covariant derivative is introduced which in plain sight is the Dirac equation minimally coupled to the E-Mag field, i.e. ∂ → D. Although it seems like there is an infinite set of interactions allowed, the requirement of renormalizability of physical theories comes to rescue and only a small subset of {scalar, spinor, vector} interactions is retained, e.g. φn (n≤4), spinor-fermion, etc. That’s the good news. The bad news is that we don’t know how to exactly solve most interacting theories.

In the interacting field theory (we shall limit ourselves to φ4) the vacuum Ω is in general different from the one in the free theory. The interaction picture is the easiest to work with. … … …

We have been able to write down correlation function in the interacting field theory in terms of CFs of time ordered free field operators in the free vacuum. Towards Wick’s theorem, we need to understand Normal ordering and Contractions. Normal ordering is the prescription of rearranging products of ladder operators as annihilation operators on the right of creation operators - as such v.e.v. of normal ordered operators vanishes. In free field theory, a contraction is essentially writing down the Feynman propagator between the corresponding points. Wick’s theorem says that time ordered product of field operators is given by the normal ordered sum of the product of free fields and a sequence of all possible field contractions; it is clear from this that partially contracted terms vanish inside the v.e.v., and are unimportant.

First, it is funny that Dick’s diagrams follow from Wick’s theorem. We’ve seen that the CF of free field operators is equal to sum over all possible complete contractions. That naturally gives us a set of propagators flanking between a set of (external) points - the interpretation is that of a particle being created at one point, propagating to another point and being destroyed there; this is in accordance with the interpretation (in 2.3) of φ(x) as creating a particle at x. From (4.2), we have the answer for the v.e.v. in the interaction theory. For small λ, the time-ordered CF gives us a series of terms which contain Wick contractions over fields at the same point - we can read off the symmetry factors. The Wick picture also tells us why a φ4 term only allows 4 lines at a vertex. Finally, the mess at the end of (4.2) can be interpreted in the form of a beautiful theorem - the sum of all Feynman diagrams (originating from the above series) can be factored into a sum of all connected diagrams times an exponent over all disconnected pieces. The latter goes away from the normalisation in Eq(4.31). However, a little thought tells us that the factorization was indeed obvious. In any case, we can now draw the Feynman diagrams corresponding to a given order in perturbation theory. http://sdutta9.web.engr.illinois.edu/ps4.html

UV divergences are ubiquitous in QFT. And that shouldn’t bother us if they don’t appear in physical predictions - one way to guarantee that is to accept some of the parameters as measured parameters - such QFTs are called renormalizable, and QED is an example. To write an effective field theory, we need the relevant microscopic parameters and the relevant degrees of freedom. Kenny Wilson discovered that QFTs have a correspondence with statistical physics of fluids - in that spirit, we look at the Landau theory of phase transitions for a ferromagnet. http://sdutta9.web.engr.illinois.edu/ps8.html