Why it is interesting?

Variational calculus of the catenary

'Catenary' is the name of the curve that represents the shape of a hanging chain. The catenary problem is a problem in statics. Each point of the hanging chain is motionless, as if all points of the chain are anchored.

Given that the chain is motionless this evaluation can be repeated everywhere along the length of the chain, from the top anchor point to the lowest point, which is in the middle. This means that the state of static equilibrium of the catenary can be expressed in the form of a differential equation. I will refer to this way of obtaining a differential equation as 'the direct approach'.

This raises the question: is it fortuitous that the problem of finding the shape of a catenary can be stated as a differential equation?

In fact this is a general property, and the underlying reason for that was first recognized by the mathematician Jacob Bernoulli. This was in the context of the Brachistochrone problem.

When Johann Bernoulli had presented the Brachistochrone problem to the mathematicians of the time Jacob Bernoulli was among the few who was able to find the solution independently. The treatment by Jacob Bernoulli is in the Acta Eruditorum, May 1697, pp. 211-217

Jacob opens his treatment with an observation concerning the fact that the curve that is sought is a minimum curve. 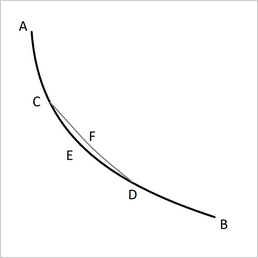 Lemma. Let ACEDB be the desired curve along which a heavy point falls from A to B in the shortest time, and let C and D be two points on it as close together as we like. Then the segment of arc CED is among all segments of arc with C and D as end points the segment that a heavy point falling from A traverses in the shortest time. Indeed, if another segment of arc CFD were traversed in a shorter time, then the point would move along ACFDB in a shorter time than along ACEDB, which is contrary to our supposition.

The historical statement of Jacob's Lemma was specifically for the Brachistochrone problem. Generalization of it is straightforward. It makes no difference whether the extremum condition is a minimum condition or a maximum condition.

It follows that if a problem can be stated in variational form, then if a solution exists there exists a way to restate the condition in the form of a differential equation.

The strategy of finding a solution to a problem in variational calculus is to find the way to restate the problem in terms of differential calculus.

The existence of the Euler-Lagrange equation is in itself mathematical proof that any problem in variatioal calculus can be restated as a problem in differential calculus. As stated in the previous paragraph: the derivation of the Euler-Lagrange equation is completely general since it requires a single assumption only: that the solution to the variational problem satisfies an extremum condition.

What we know from Calculus

On calculus, when we want to find the extremum of a function, we use the derivative:

This is the recipe of the variational problem

See Karen Uhlenbeck and the Calculus of Variations by Simon Donaldson