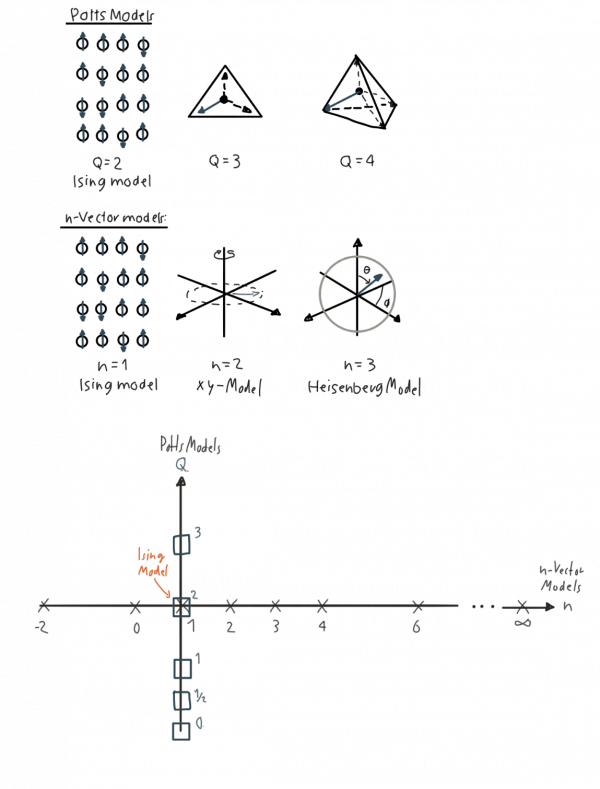 Spin models can be classified depending on how many different states are possible at each lattice site and if the set of possible states is continuous or discrete.

Within these subcategories we have different models depending on how many states there are in total. For Potts models, the number of orientations that are possible is denoted by $Q$. For n-vector models, the dimension in which the continuous set of states live at each node is denoted by an $n$.

For $n=1$ and $Q=2$ the two types of models overlap and this special model is known as the Ising model.

The first of these is the Q-state Potts model (Potts, 1952; Wu, 1982). One assumes that each spin i can be in one of Q possible discrete orientations $\chi_i$ $(\chi_i =,1,2,\ldots,Q)$. If two neighboring spins i and j are in the same orientation, then they contribute an amount $-J$ to the total energy of a configuration. If i and j are in different orientations, they contribute nothing. Thus the interaction Hamiltonian is

where $\delta(\chi_i ,\chi_j)=1$ if $\chi_i=\chi_j$, and is zero otherwise. The angular brackets in Eq. (12a) indicate that he summation is over all pairs of nearest-neighbor sites $\langle ij\rangle$. The interaction energy of a pair of neighboring parallel spins is $-J$, so that if $J>0$, the system should order ferromagnetically at $T=0$.

$$\mathcal H(d,n)=-J\sum_{\langle ij\rangle} \vec S_i \cdot \vec S_j$$ Here, the spin $\vec S_i=(S_{i1} ,S_{i2} ,\ldots,S_{in})$ is an n-dimensional unit vector with ($\sum_{\alpha=1}^n S_{i\alpha}^2=1$, and $\vec S_i$ interacts isotropically with spin $\vec S_j$ localized on site j. Two parameters in the n-vector model are the system dimensionality d and the spin dimensionality n. The parameter n is sometimes called the order-parameter symmetry number; both d and n determine the universality class of a system for static exponents. Both the Potts and n-vector hierarchies are generalization of the simple Ising model of a uniaxial ferromagnet. Scaling, universality, and renormalization: Three pillars of modern critical phenomena by H.Eugene Stanley

"Empirically, one finds that all systems in nature belong to one of a comparatively small number of such universality classes. Two specific microscopic interaction Hamiltonians appear almost sufficient to encompass the universality classes necessary for static critical phenomena.

Phase transitions are a central theme of statistical mechanics, and of probability more generally. Lattice spin models represent a general paradigm for phase transitions in finite dimensions, describing ferromagnets and even some fluids (lattice gases).Lectures on the Ising and Potts models on the hypercubic lattice by Hugo Duminil-Copin