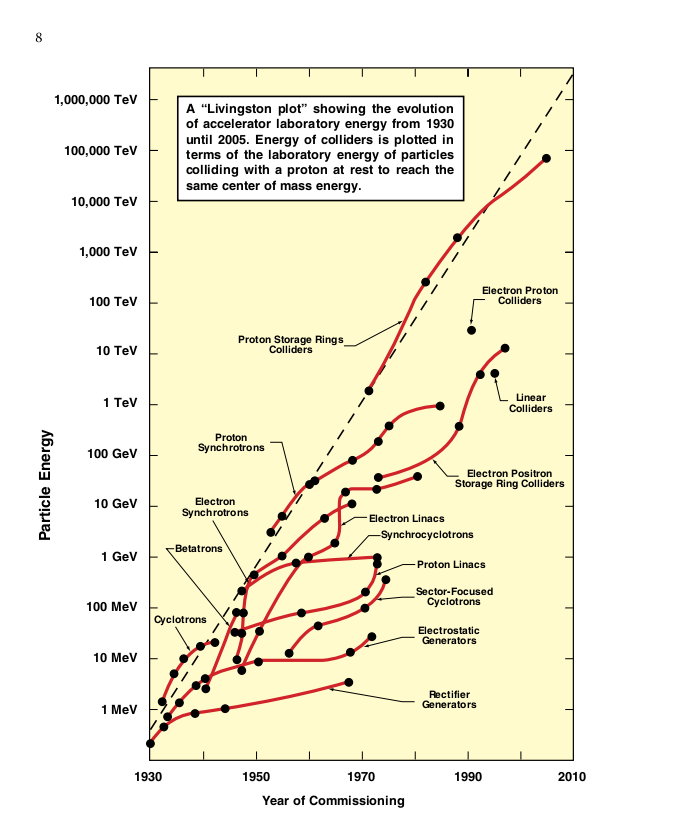 Is Mr. Lindley right? He concludes: "We are already at the point where experiments are becoming impossible for technological reasons and unthinkable for social and political reasons. An accelerator bigger than the supercollider would be a vast technical challenge. . . . Experiments to test fundamental physics are at the point of impossibility." Physicists, he says, seem to be returning to the days of the ancient Greeks, who did physics "by means of thought alone." Maybe he doesn't know about the Livingston curve. Mr. Lindley, I'm sure, would hate the Livingston curve. It's one of those mathematical curiosities that are probably meaningless. In the 1950's, a physicist named Stanley Livingston drew a line on a graph that plotted the energy available in laboratories from the time of J. J. Thomson (circa 1897) to his own era, then extended it into the future. He found a logarithmic relationship: the energy increased by roughly a factor of 10 every 10 years. The Livingston curve has accurately predicted accelerator energies in the 1960's, 70's, 80's and 90's. Extrapolated to the future, it predicts that we'll have what is called Planck-scale energy in the lab by the year 2150. A Planck-scale accelerator would be powerful enough to prove one of the most popular unified theories, superstring theory.

A particle collider is essentially a large microscope. It doesn’t use light, it uses fast particles, and it doesn’t probe a target plate, it probes other particles, but the idea is the same: It lets us look at matter very closely. A larger collider would let us look closer than we have so far, and that’s the most obvious way to learn more about the structure of matter.https://backreaction.blogspot.de/2018/03/the-multiworse-is-coming.htmly

Richard P. Feynman once said that doing elementary particle physics is a lot like banging two fine Swiss watches against each other and trying to figure out their workings by examining the debris. That was the challenge.

From My Life As A Quant by Emanuel Derman