When the physics of collisions is discussed the concept of kinetic energy tends to come up. For instance: collision of cars. Going twice as fast makes things much worse. The amount of damage in a collision is proportional to the kinetic energy, and kinetic energy goes up with the square of the velocity.

At first sight that looks counter-intuitive. The aim of the following is to make that relation feel natural.

Gravity here on Earth has properties that make it very suitable to build this exposition.
- Gravity at the top of a building is to all intents and purposes the same as on ground level, so we can treat gravity as uniform.
- The acceleration that gravity causes is independent of the already existing velocity of an object. Velocity just keeps accumulating.

The above two properties make gravity behave in a linear way.

In the 1840's James Prescott Joule set out to verify that gravitational potential energy converts to heat in a consistent way.

Among the setups used by Joule was one of the type shown in the image. A weight is attached to a rope, the rope runs over a pulley. At the start the rope is coiled around a vertical axle that makes paddles turn in water; the water is inside a calorimeter. 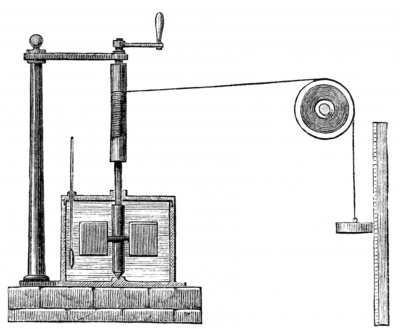 As we know, when an object is released to free fall the velocity of that object increases linear with time. To make the numbers simple lets's make the acceleration 2 meters per second, per second.

Let an object be released at a height of 16 meters. The following things change in a linear way:
- The vertical velocity changes linear with time.
- The energy increases linear with height.

This difference between the first 2 seconds and the second 2 seconds is the nature of acceleration. The velocity is increasing so the falling object keeps covering more distance per second.

With the above in place let me present a thought demonstration.

Let's say we have an object, moving at velocity, and the object is slowed down by stretching ribbons that are positioned perpendicular to the direction of velocity. (Think of the type of ribbon at the finish line of a running event.)

I will use the same acceleration as earlier in this exposition: 2 meters per second, per second.

So: the time to come to a standstill is doubled (linear relation), but the total number of ribbons snapped is quadrupled. You get that quadrupling because with more initial velocity comes quadratically more distance covered until standstill.

Going back to collisions of cars: let say there are cars with high performance crumple zones. These crumple zones are designed to keep buckling at a fairly constant force. The higher a car's velocity, the larger the length over which the crumple zone will be crumpled. Double the velocity of collision means that the amount of crumpling will be quadrupled.

The essential point:
The kinetic energy of an object should be thought of as a quantity that is linear. The energy is linear in relation to the distance traveled. When you are decelerating you travel three quarters of the total stopping distance in the first half of the stopping time, and you travel the remaining one fourth of the total stopping distance in the remaining half of the time.

Explanations in this section should contain no formulas, but instead colloquial things like you would hear them during a coffee break or at a cocktail party.

In this section things should be explained by analogy and with pictures and, if necessary, some formulas.