The formulation of Yang-Mills theory which makes use of Wilson loops is called loop formulation.

A particular nice system to understand Wilson loops in a non-technical context are financial markets. 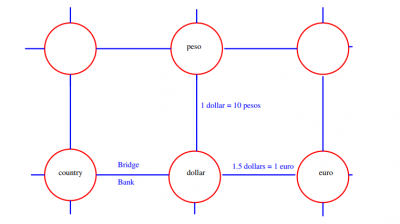 Source: The symmetry and simplicity of the laws of physics and the Higgs boson by Juan Maldacena

Now, how can we make money on the money market?

Well, let's say we are a banker in London. We have a budget of 100 pounds. Our goal is to trade our currency against other currencies in such a way that we have in the end more than 100 pounds. This means, we need to look for profitable loops through the global money lattice. We are interested in loops, because to actually determine if have earned money, we need to compare our final amount of money with the 100 pounds we started with. This is only possible if the final amount of money is also given in pounds.

Let's say the exchange rates are as follows:

How can we make money in this situation?

Thus, by trading in a loop we have gained 50 pounds.

The loops we considered here are exactly analogous to the Wilson loops used in quantum field theories. The gauge freedom corresponds here to the freedom to rescale the local currencies. For examples, England could introduce a new currency called "new-pound" and determine that 1 new-pound is worth 10 pounds. This wouldn't change the situation at the global money market at all, because all banks would simply adjust their exchange rates:

Absolute value has no meaning and this is what we call gauge freedom. We can't make more money simply because we change the local value of our currency.

For more on this perspective see

The confining phase is usually defined by the behavior of the action of the Wilson loop, which is simply the path in spacetime traced out by a quark–antiquark pair created at one point and annihilated at another point. In a non-confining theory, the action of such a loop is proportional to its perimeter. However, in a confining theory, the action of the loop is instead proportional to its area. Since the area is proportional to the separation of the quark–antiquark pair, free quarks are suppressed. Mesons are allowed in such a picture, since a loop containing another loop with the opposite orientation has only a small area between the two loops. https://en.wikipedia.org/wiki/Color_confinement

In this section things should be explained by analogy and with pictures and, if necessary, some formulas.